Today we are excited to announce a new integration partner—Fleep!

This integration is very special, because it’s the first one we’ve built in direct collaboration with the partner team.

Since Sameroom success in large part hinges on support from service providers, I decided to strike up a conversation with Henn Ruukel, Fleep’s chief executive—in Fleep, of course—to see if he’d be interested. We went back and forth for a bit, and ended up here:

Henn probably didn’t expect much to come out of this (as it happens), but within a month we were almost done—just had a few API questions for the Fleep team. So we kept inviting colleagues from both sides into my conversation with Henn, and soon we had a nice little crowd: 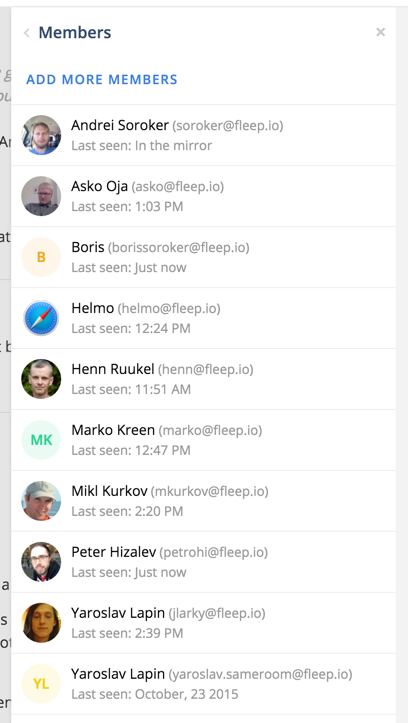 This underscores the power of Fleep: like with Skype, there is a global user registry and each user has a Fleep ID. You can add a Fleep ID (or email address) to any conversation, making Fleep an excellent platform for cross-company collaboration—federation is not only possible, it's the way Fleep works. On top of this, out of all the real-time collaboration services, Fleep has the strongest integration with email—you can almost use Fleep as an email client.

And now, because of the Sameroom integration, teams using other services—HipChat, Slack, Skype, Kato, Flowdock, IRC, Gitter, or Campfire—can work with teams on Fleep, in real-time.