I just opened my conversation with Gabriel Engel, the founder of Rocket.Chat, and scrolled to its very beginning in August 2015: 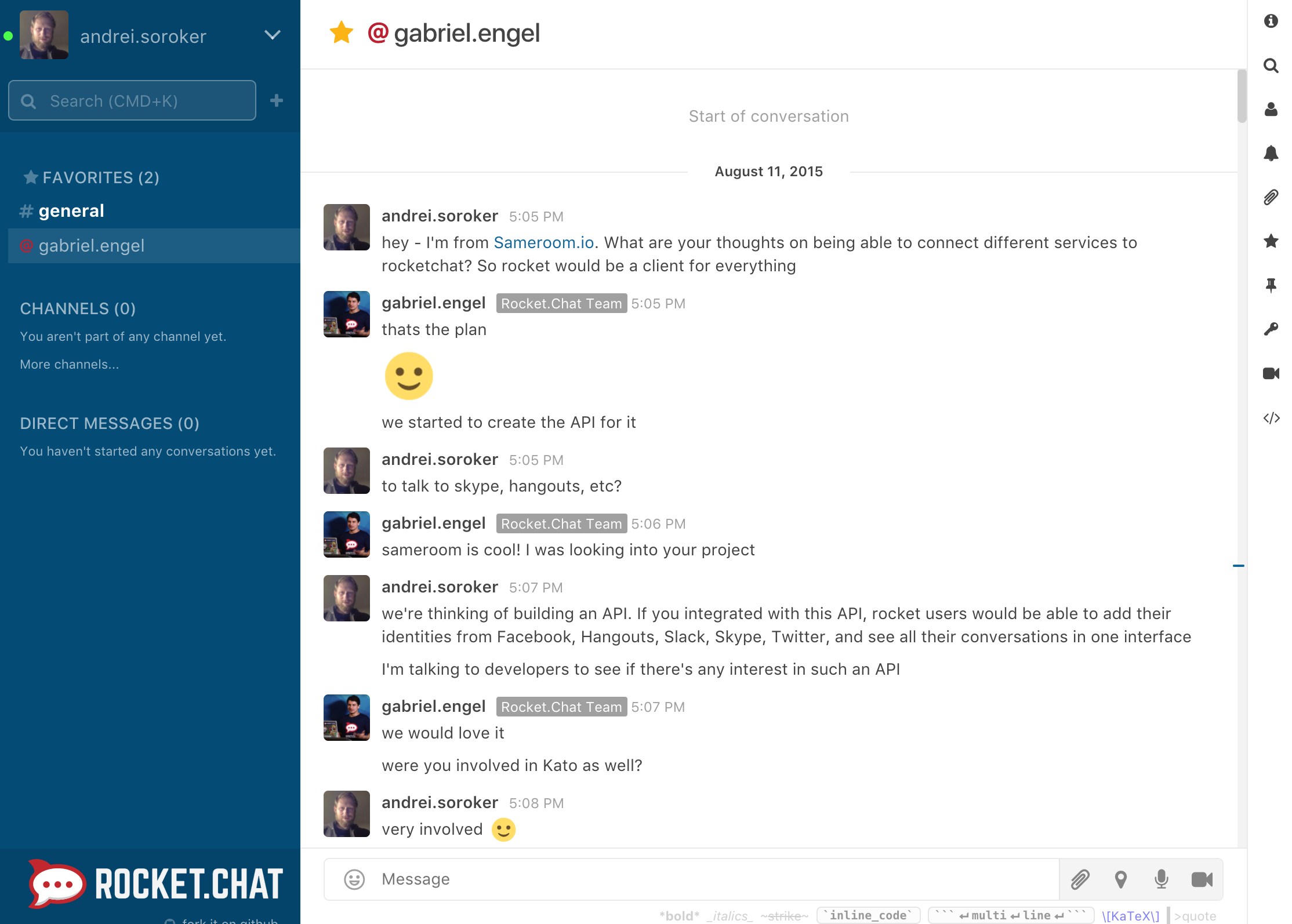 We had a great exchange, but didn't get very far in terms of agreeing to work together. The conversation happened shortly after Rocket.Chat launched and Gabriel was still in the planning stages of his world domination strategy.

Over the next eighteen months, Rocket.Chat became quite popular and found a commercial niche among organizations looking for self-hosted, open-source, custom (or white-labelled) real-time collaboration solutions. And, as it eventually happens to all chat systems that experience success, interoperability—or lack thereof—came up.

I don't know the exact reason why Gabriel reached out to us with a request for integration, but he was serious: it was needed "asap" and we had the full attention of Bradley Hilton, a staff Rocket.Chat developer.

Bradley set us up with a staging environment running the latest build, we stood up a sameroom between Google Hangouts and Fleep for seamless, safe, and compliant cross-team communication, and, after just a few weeks of Bradley tweaking the Rocket.Chat protocol, the integration went live.

Today, we're happy to announce the integration of Rocket.Chat with Sameroom.io, which enables Rocket.Chat users to connect rooms and DMs from their home Rocket.Chat host with about two dozen other chat services, including Slack, Skype, HipChat, Google Hangouts, Mattermost, and Fleep.

For a list of all possible integration, visit https://sameroom.io/integrations/rocketchat-integrations.

If you have any questions or need help with the integration, ping us on Twitter or send an email to support@sameroom.io.

Mattermost is a open source team chat service that’s compatible with Slack’s API and is trivial to self-host.

I’m happy to announce that Sameroom now integrates with Mattermost, which enables Mattermost users to share channels not only with 20+ other services, but also with channels in other Mattermost instances.

Below is a copy of the announcement post I guest-wrote on the official Mattermost blog.

My name is Andrei—I run Sameroom, where we make chat interoperability easy. I’m excited to announce the integration of Mattermost with Sameroom.io, allowing users of the open-source Slack alternative to connect to 21 different messengers, including Slack, Skype, and HipChat.

Let’s take a step back for a brief survey of the current business chat landscape—I’ll show why cross-platform and cross-instance interoperability is an important stepping stone in making chat a viable model for external communication.

Team chat has long been the internal collaboration approach of choice for technical teams. Traditionally, these teams have been small, closely-knit units within large organizations. Since corporate IT rarely, if ever, offered team chat as approved technology, each unit chose its own platform and used it under the radar.

After decades of quiet, the word got out. The number of team chat solutions mushroomed, seemingly overnight. VC and corporate investment in the space jumped from virtually zero to billions. The New York Times and The Economist announced the end of email.

Small, closely-knit teams, accustomed to email for anything external, began getting invites to other units’ collaboration solutions. There was excitement—they were right all along!—but also a feeling of the implacable undoing of everything that was right in the world.

Unlike email servers, various team chat services, and even isolated instances of the same type of service, generally don’t know how to work together—there is no “universal ether”, a protocol similar to SMTP, for chat. XMPP was a solid attempt at one, but it didn’t work out.

Lack of cross-team and cross-platform interoperability results in two fundamental problems. The first problem has to do with compliance—most corporate policies require all company-related communication to be retained on company-owned systems. Therefore, for every “guest access” scenario, one of the sides invariably violates its corporate policy.

The second problem is account creep—if, for every external project, every person in a tightly-knit team has to create and maintain another account that has to be monitored on desktop and mobile, it’s easy to see that this approach doesn’t scale.

We built Sameroom to fix these two problems. Sameroom makes it easy to create real-time, 2-way bridges (we call them “tubes”) between chatrooms belonging to different environments.

A tube connects two rooms or channels into a virtual “same room”. Tubes can be arranged in an arbitrary topology. Each room retains its own copy of chat history, making chat-based cross-company communication compliant.

Fig 1. Six chatrooms, all connected into a virtual “same room”.

With Sameroom, account creep doesn’t happen at all: For every external project, a team can designate a channel shared with a channel in the service used by the other party.

Over the past few months, we’ve heard a steadily increasing choir of requests for an integration with Mattermost. Today, we’re happy to announce its general availability.

The integration is full-featured, and is actually superior to Slack’s in one important way: Files appear to be posted from the actual author, not “sameroom”. 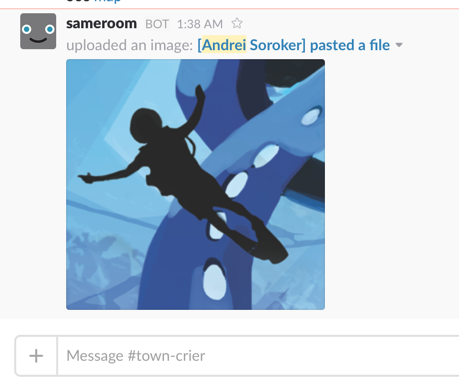 Fig 2. Files shared in Slack come from the “sameroom”, with actual author’s name appearing in a comment. 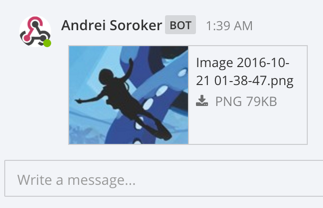 Fig 3. Files shared in Mattermost come from the actual author

In addition to cross-platform integrations, Sameroom makes it easy to share channels between different Mattermost instances—as Mattermost grows in popularity, it’s safe to assume there will be an increased need in Mattermost-to-Mattermost connectivity.

To get started with the Sameroom Mattermost integration, follow this URL: https://sameroom.io/integrations/mattermost-integrations.

Today we’re happy to announce support for GroupMe as a part of our new set of BridgeBot integrations.

With this integration, it’s easy to sync GroupMe groups with groups/channels/rooms in other collaboration systems (Sameroom supports over 20!).

Let’s take a look at connecting a GroupMe group to a group in Skype.

This will create a 2-way, real-time Tube between the two groups. For more info, post -sameroom help in either group.

Slack is an example of a service without a BridgeBot: You’ll have to add your Slack account to Sameroom (part of step 3, below).

Over time, we realized that more often than not, we suggest that our users create special “bot” (or, in other word, “relay”) accounts for Sameroom integrations.

The main reason for this tends to be user experience. With the exception of Slack, Fleep, and Flowdock, none of the services we support offer a way to safely “impersonate” a user, leading to confusion.

@sameroomhq Have a Slack -> Gitter integration. I'd like to be able to customize the name that shows up. Everyone thinks it's me talking.

While we can’t fix this situation by ourselves—we’ll need some help from the chat services to expand their APIs—with some systems we can remove the need for creating new “relay” accounts.

All the messaging platforms with a global user directory1 will eventually get special Sameroom BridgeBots that you can invite to rooms or channels and create connections (Tubes) to other systems through -sameroom open or -sameroom portal commands. As a bonus, Tubes between BridgeBots will be on us—free as in beer.

To create a Tube to a system with BridgeBot support:

Skype: Add the Skype BridgeBot to Contacts (we recommend using https://web.skype.com instead of the desktop/mobile client to do this), then add the Sameroom bot to your Skype group (create one if necessary). Note: if you’re having problems with this, please let us know and we’ll help you sort it out.

Then, post the -sameroom open message and wait for the BridgeBot to respond with a code. Copy that code.

In the other chatroom, type -sameroom connect <paste the copied code>.

The other chatroom may be in another BridgeBot-enabled system, or in a team-based one (HipChat, Slack, Mattermost, Flowdock, etc) previously enabled for Sameroom.

Since Google Hangouts has absolutely no developer APIs, the authentication loophole used in the Sameroom Hangouts integration has always been a bit of a gamble.

Google finally killed the loophole a couple of weeks ago, preventing new users from signing into Sameroom with Hangouts, but leaving existing integrations intact.

(Aside from the small problem of not having an API, Hangouts has been one of the most reliable providers Sameroom supports: there have been virtually no outages in over a year of operation.)

Today we’re releasing a “fix” for our authentication problem by asking for your Google password.

For this to work, enable two-factor verification for your Google account—but not Google Prompt: Use the Google Authenticator method or SMS.

If you’re using Google Apps, an admin has to enable two-step verification for your domain.

Once you authenticate on Sameroom, Google will send you an email similar to this one: 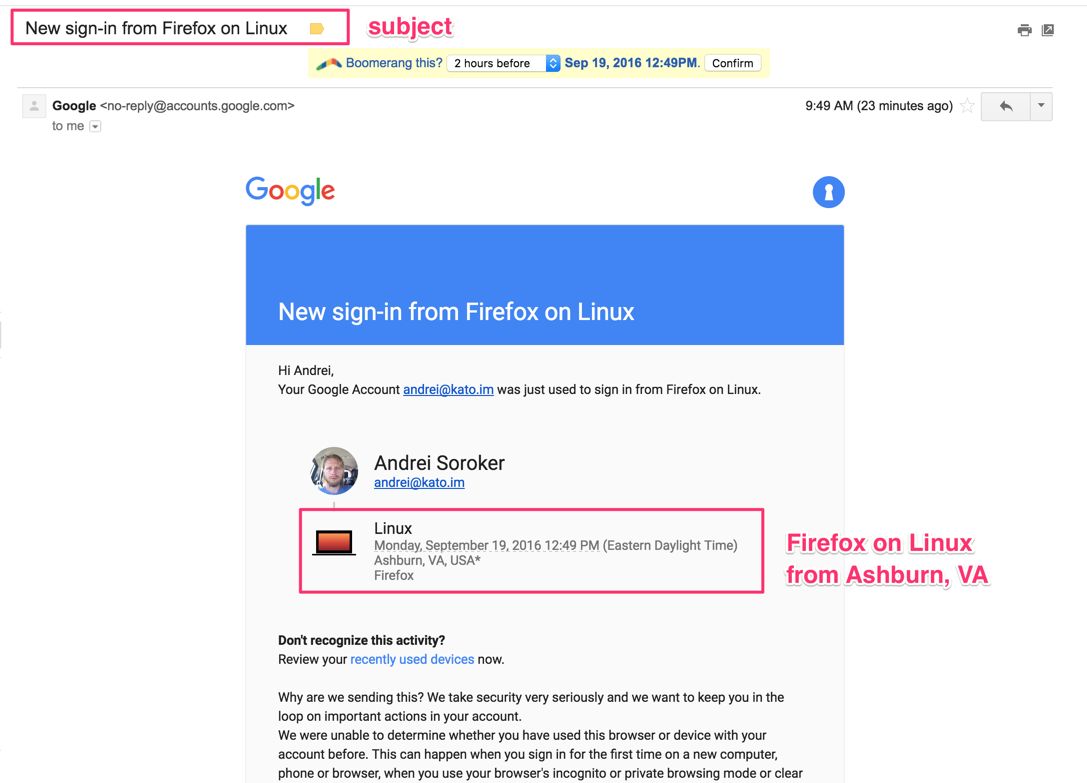 If you have any questions, please get in touch.